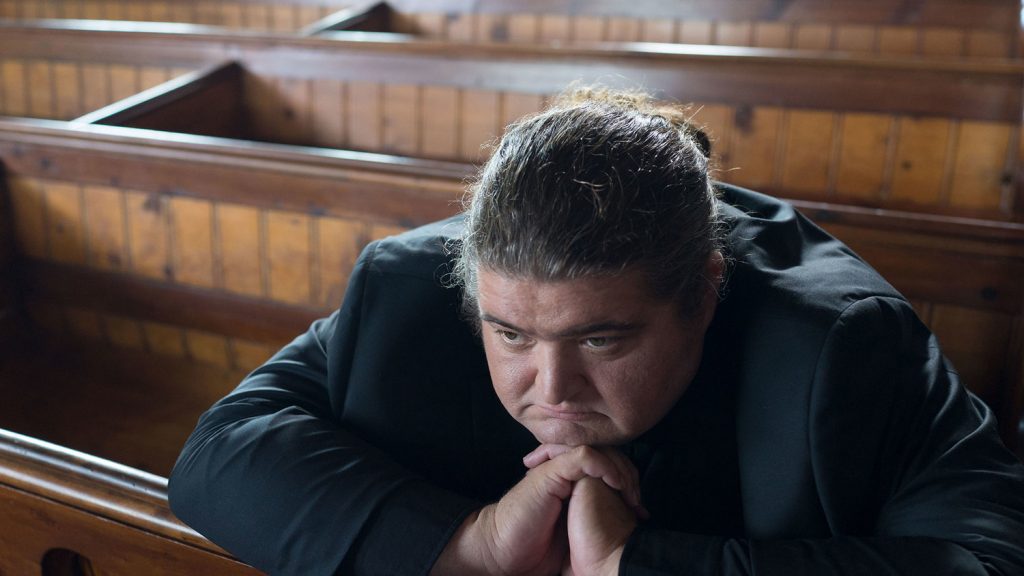 Jorge Garcia (born April 28, 1973) is an American actor and comedian. He first came to public attention with his performance as Hector Lopez on the television show Becker and later for his portrayal of Hugo «Hurley» Reyes in the television series Lost. Garcia also performs as a stand-up comedian. He more recently starred in the FOX television series Alcatraz, as well as playing a minor character on ABC’s Once Upon a Time. Currently he stars as Jerry Ortega on Hawaii Five-0.

Garcia was born in Omaha, Nebraska. His mother, Dora Mesa, is a Cuban-born professor, and his father, Humberto Garcia, is a Chilean-born doctor. He grew up in San Juan Capistrano in Orange County, California and went to San Clemente High School. He wrestled in high school, where he was given the nickname «Baby-Faced Killer». As a senior, he was selected by the faculty as «Triton of the Year», the highest award given to a graduating senior.

Garcia graduated from the University of California Los Angeles (UCLA) in 1995 as a Communication Studies major. He also studied acting at the Beverly Hills Playhouse acting school.

Garcia spent six years working at Borders Books and Music while auditioning. He was in a few commercials during that time. He later said that his first taste of street recognition came from starring in a Jack in the Box commercial which was aired frequently on local television. He began landing roles in television and film, but his career really took off when he played the role of Hugo Reyes (Hurley) in the television series Lost.

Garcia was the first actor to be cast on Lost after the producers saw him on Curb Your Enthusiasm the night before casting began, and created the character of Hugo Reyes specifically for him. García appeared in the second episode of the eighth season of Celebrity Poker Showdown, where he lost to Michael Ian Black. He was a contestant on an episode of Russian Roulette on Game Show Network. He missed a question about the Boxer Rebellion of 1900 and fell through the trap door.

Garcia is scheduled to star in the movie When We Were Pirates, for which he is also an associate producer. In the independent film, he will play a man named Jerry, who along with a group of close friends, learn that their childhood love of playing pirates helps them overcome some of the difficulties they face later in their lives. He is also seen singing in the studio for the upcoming project on an officially released YouTube clip. During Lost’s run, Garcia wrote a blog about the show called Dispatches from the Island. He also hosted a weekly podcast, Geronimo Jack’s Beard, in which he discussed the script of Season 6 along with his then girlfriend Bethany Leigh Shady.

Garcia is also featured on the front cover of Weezer‘s album Hurley, released on September 10, 2010. The album is named after his character from Lost. He performed as a guest vocalist at several Weezer concerts in 2010.

On 21 November 2010, Entertainment Weekly announced that Garcia was cast in the upcoming U.S. television series Alcatraz. On 23 November 2010, Garcia made a guest appearance on How I Met Your Mother‘s episode «Blitzgiving«. In the episode references are made to Garcia’s time on Lost.

In 2011, Garcia appeared as a recurring character in Mr. Sunshine, portraying a caretaker at the Sunshine Center. Starting in January 2012, Garcia portrayed Dr. Diego Soto, an Alcatraz expert, in the FOX series, Alcatraz. The show was a mid-season replacement for Fox’s Terra Nova. Despite an impressive start, the series was officially cancelled by Fox on May 9, 2012, due to dropping viewership throughout its run. Garcia appeared on The Nerdistpodcast posted June 18, 2012.

In 2013, Garcia played Steve Wozniak in the parody film, iSteve, produced for the Funny or Die website.

After appearing as a guest star in several season four episodes of Hawaii Five-0, Garcia who plays the character of Jerry Ortega will be promoted to series regular commencing season five.